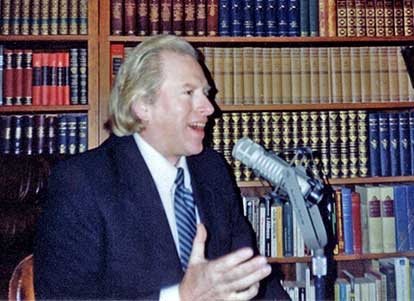 About the Spiritual Renaissance® Broadcast

This website contains the radio broadcasts of Vern Benom Grimsley , known as the Spiritual Renaissance® Broadcast.  These broadcasts are the lion’s share of his life work and span the working years from 1964 to 2005.  Vern’s message to the world was one of FAITH, HOPE and LOVE; dedicating his talents to proclaiming a clearer understanding of the Teachings of Jesus and a call for the spiritual awaking of the individual and his or her relationship with God.  These broadcasts are filled with practical parables, humorous antidotes and insights into our personal working relationship with God.  This LIFE WORK is a good illustration of Jesus’s parable of the Talents and the Pounds: each of us is given one talent what we do with it is our gift to God.

Vern Grimsley was born in Garden City, Kansas December 22, 1940.  His father was a college teacher and coach, and mother was a homemaker that had studied to be in the medical field.  Vern was nine years old when his father died of heart failure.  Vern attended Culver Military Academy for his freshman and sophomore years in high school.  He then returned to Garden City, Kansas and developed an avid interest in radio, becoming a DJ while finishing high school and also winning the Kansas State Chamber of Commerce speaking contest which included a trip to Washington DC and the meeting of President Dwight D Eisenhower in the Oval Office.  Vern also functioned as the interim preacher at his local church for a few months while the church found and hired the official minister.  He would write and deliver the sermons but not be involved in the other official church activities.  Vern’s speaking and writing talents were evident and recognized at an early age.  Vern pursued his studies at the University of Kansas where he majored in Philosophy with a minor in Psychology graduating in spring of 1963. 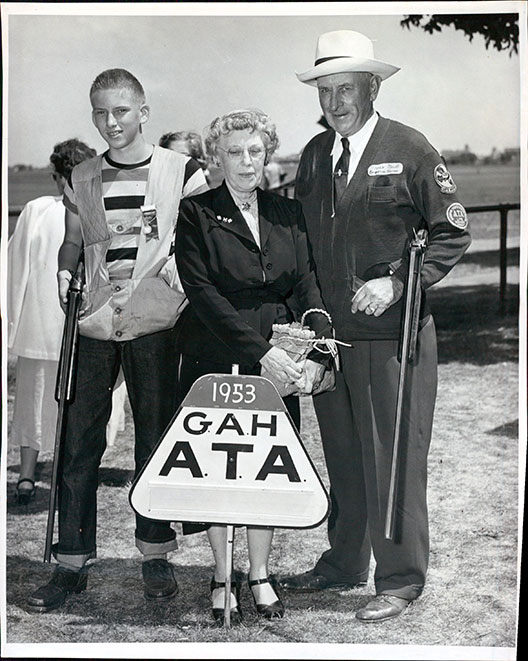 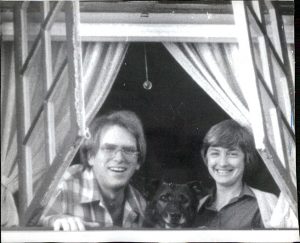 Vern married his high school sweetheart Nancy Smithe in 1960, and both finished college at the University of Kansas in Lawrence, Kansas.   He was a good student and an excellent researcher, graduating with Phi Beta Kappa honors.  Vern received a scholarship to attend Pacific School of Religion in Berkeley, California.  The young couple moved to Berkeley in late summer of 1963 and Vern started seminary that fall while Nancy went to work at the University of California in Berkeley in the Art History department. 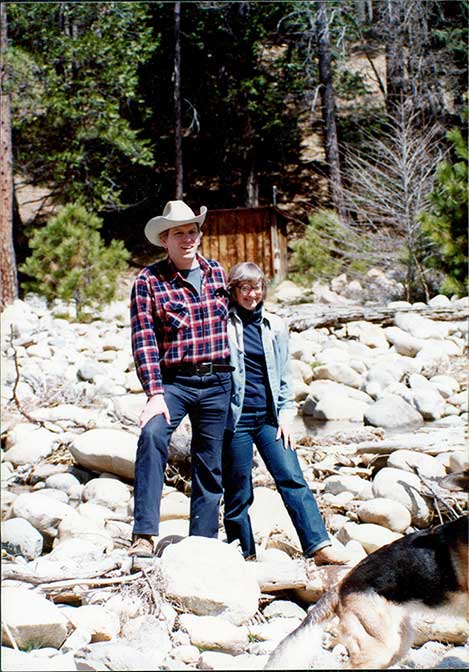 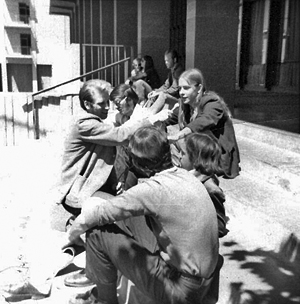 The seminary at Pacific School of Religion was dominated by “social action.” The main interest of the professors was political in nature; sit-ins, protest marches and voter registration.  Vern’s interest was the understanding and insights of the great religious leaders concerning man’s relationship with God and God’s relationship with man and most of all a clearer understanding of the life and teachings of Jesus.

Through this semester at Pacific School of Religion Vern and Nancy walked the Berkeley campus after school and work talking to each other and praying for guidance as to God’s direction for their ministry.   Nancy was the breadwinner and Vern the Preacher; together they arrived at the decision to leave seminary after one semester, give back the scholarship and set sail on their own faith venture. 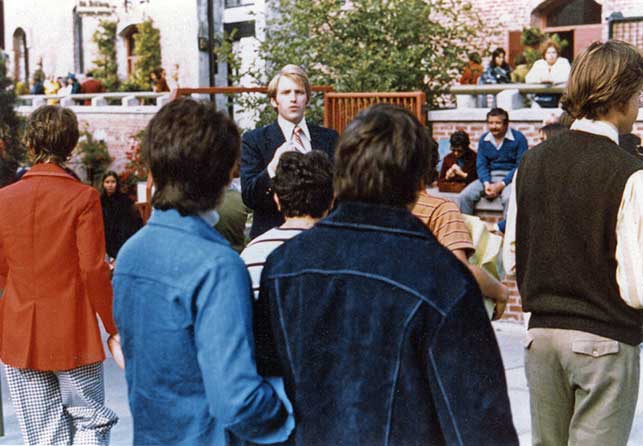 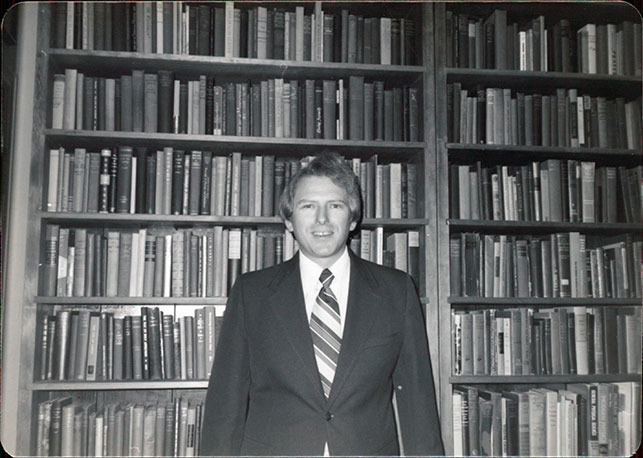 Nancy would continue to work at the University in Berkeley and Vern would pursue an independent study of the great thinkers of history, religious leaders of mankind and a deeper understanding of the life and teachings of Jesus, while he also preached anywhere he could.  Nancy’s working position with the University of California allowed Vern to have access to the libraries and stacks of literature that enabled his independent study.

While in seminary he became the youth minister of a large church in Oakland and continued this ministry after leaving Pacific School of Religion.  One Sunday the senior minister of this church was absent and Vern was called to deliver the service.  In the audience was an acquaintance from Garden City, Kansas who was also the manager of KFAX radio station of the San Francisco Bay area.  This person remembered Vern, liked the sermon and offered Vern a chance to produce a 15-minute broadcast for KFAX.  This was the beginning of the Spiritual Renaissance® Broadcast; the first broadcast was on December 12, 1964. 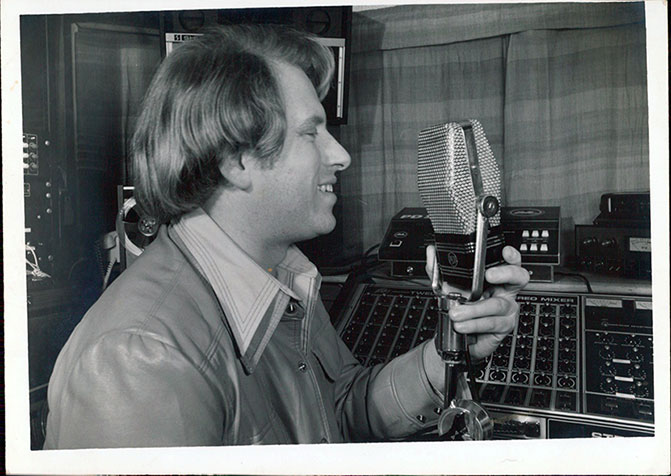 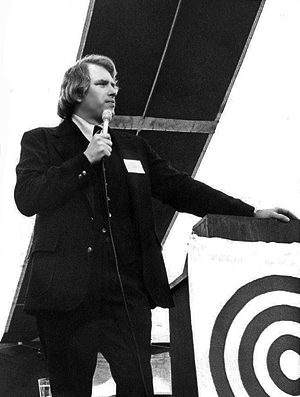 This was a fermenting time in Vern’s ministry; it was really a faith adventure.  He was engaged in independent study of the great spiritual thought of mankind, deepening understanding of the life and teachings of Jesus, writing and producing radio broadcasts and the growing conviction that he needed to engage the general public in discussions concerning the meaning of life and man’s relationship with God.  He felt compelled to publicly preach, to directly engage the public in a one-on-one challenge to think and discuss their personal relationship with God.

This was also the height of the free speech movement in Berkeley.  Vern went out on the Berkeley campus with a soap box and began to preach and engage students and the general public with questions about the meaning of life and man’s relationship with God.  He would tape these conversations and play them back to Nancy for her feedback; Nancy had the idea of putting these taped discussions on the radio. This was the origin of “On Campus” pure street ministry!  Visit the On Campus page to hear recordings of these lively discussions. 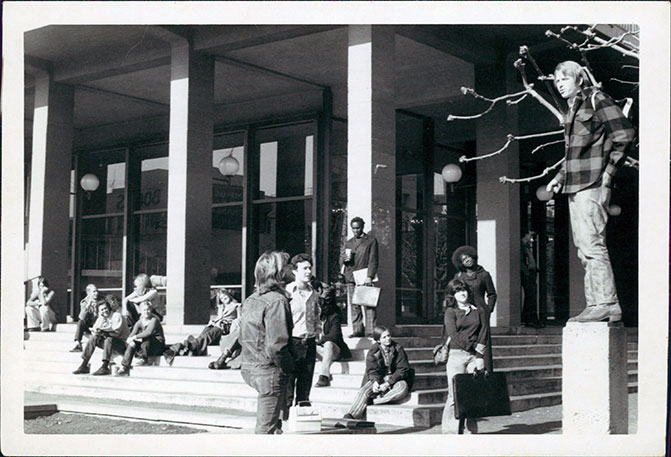 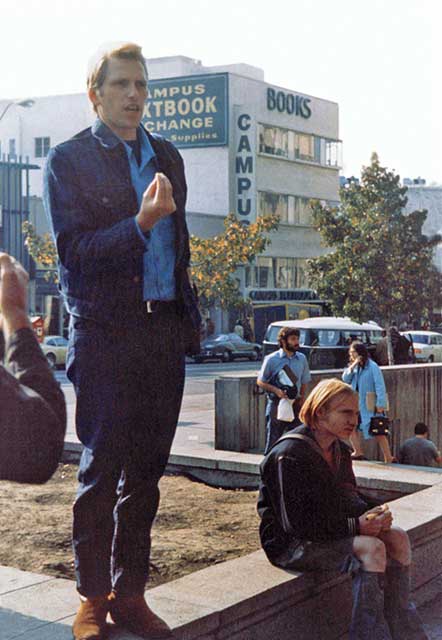 This was a unique time on college campuses.  Many different ideas were being discussed, there was much unrest concerning the Vietnam War and a free exchange of ideas was encouraged.  Into this mix Vern presented ideas about God, man’s relationship with God and a clearer understanding of the spiritual concept of the Kingdom of Heaven.  Students and pedestrians were challenged to think about God as a personal experience and give voice to their efforts to understand God’s working in their life or the absence of that experience.

Vern was a born preacher and evangelist and began a public speaking career by being booked with the Franklin Agency to make public speeches to various community and social organizations.  He would go on tour for several months out of the year.  The subject of his public address was the “The Dynamic Principles of Applied Psychology” which was a clever way of delivering the teachings of Jesus to a secular audience without many of them recognizing the gospel in the language of self-improvement psychology.  This public speaking was for Knife and Fork Clubs, Chambers of Commerce, Metropolitan Dinner Clubs, the AMA and other civic organizations interested in public speakers.  His style of speaking was direct and enthusiastic with the ability to inspire the audience to believe in themselves and make their lives better; constantly directing their thinking towards a spiritually uplifting message.  He had the ability to address the soul of man, to quicken in a listener the spiritual urge to find and know God.  It was not uncommon for him to receive a standing ovation. 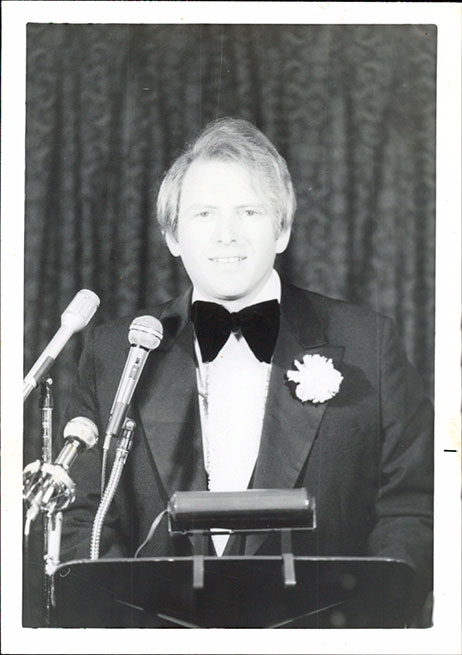 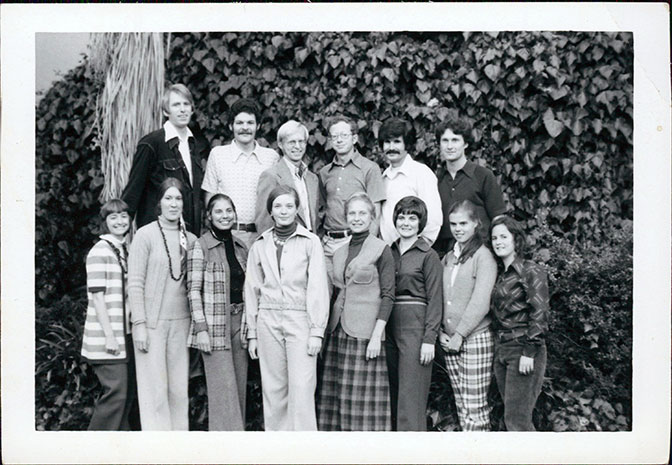 Vern’s talent for speaking attracted a growing group of young people with similar convictions.  This group worked to promote and distribute Vern’s radio broadcast around the United States and also the world.  At its height the broadcast was heard across the United States and on 6 international stations.  The rapid growth at that time also attracted some with talent that had their own personal projects that became linked to Vern’s ministry:  there was a multimedia division, a Spiritual Renaissance® Music production, and the Spiritual Renaissance® Press.

Money was pouring in due to the lucrative investments of the financial manager.   This ministry was outgrowing the Berkeley fraternity house that had been its headquarters for several years.   Vern found a new location on the outskirts of the San Francisco Bay area that held great potential, a red brick private Catholic school located on 24 acres at the base of Mt. Diablo.  This move combined with other events concerning personnel led to a sifting in the organized group involved with this ministry; the result being the loss of personnel and the loss of the new property. 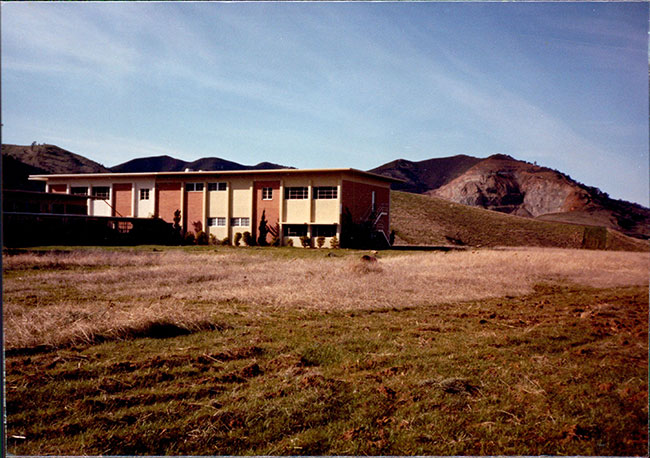 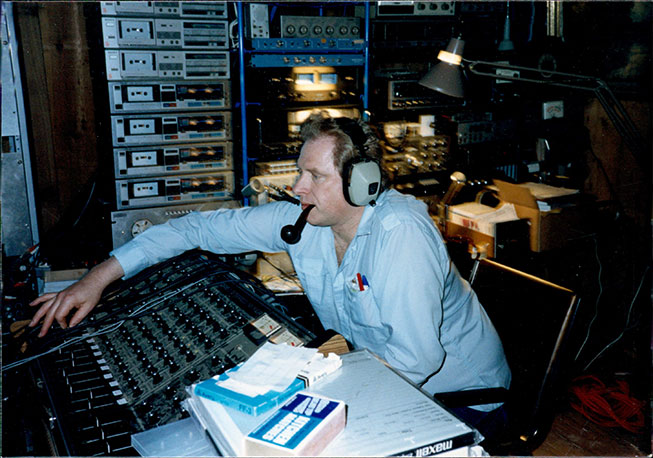 Following this devastating loss Vern and Nancy relocated to Oakhurst, CA where Vern continued his radio broadcasts and pursued various ministries in the local community.  Through all the ups and downs, the sunshine and the storms, Vern preached on.  Plagued by various illnesses through his life and abandoned by many friends and co-workers at various times, he preached on:  Dedicating his time and energies to making radio broadcasts that uplift the spiritual concept of the Kingdom of Heaven, minister to the soul of the individual and clarify man’s personal relationship with God as demonstrated by the life of Jesus. 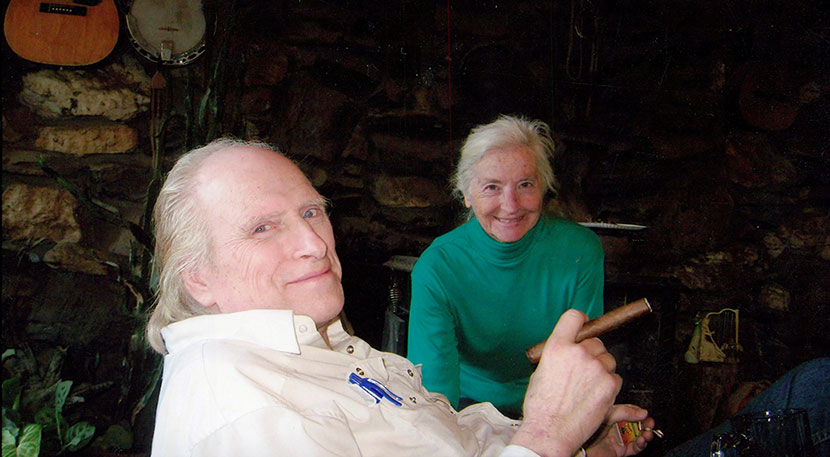 The closing chapter of Vern’s earth life took place at his home in the mountains south of Yosemite National Park.  Nancy had just retired in the spring of 2011 and the two were in close companionship for the months remaining.  In the fall of that year a long-time friend and his wife came to visit – David and Rose Clearwaters from Oregon.  It was a wonderful visit and shortly after this Vern’s various illnesses over powered his immune system.  He went to the hospital on Christmas day and died January 1, 2012.  His mind was clear to the end of his consciousness; his life was one of constant and persistent ministry, giving the world the best he had in thought and speech.